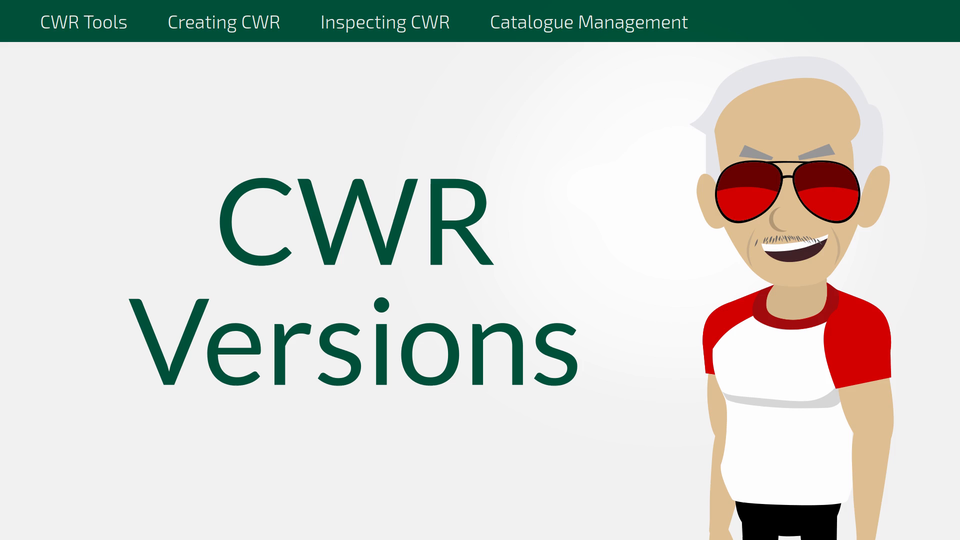 We also have a video covering this topic.

For well over a decade, there was a single active version of CWR. For a while, revisions were coming out. Revision 7 came out in 2013. Then, nothing new happened until 2019.

And now we have 4 versions of CWR being actively revised. Yes, something is very wrong here. But let us deal with the facts first.

This is de facto CWR for just about everyone in the music industry. Since 2013, there was only one minor change in 2019, due to the fact that an ever-increasing number of publishers with IPI name numbers with 10 digits were not able to use it. Now they can.

With this revision, CISAC effectively admitted that CWR 2.1 is here to stay for a while longer, something that has been obvious for a while now.

This is a version that was not supposed to come out. Now that it did, everyone wishes it did not. The rationale for its release was that there were several urgent issues that can not wait until 3.0. Of these urgent issues, the only actually urgent one was the aforementioned 10-digit IPI issue, now solved in 2.1. Most additions in 2.2 are gone in 3.0 anyway. And, very few societies properly implemented 2.2. Most that claim that they have, just parse it as 2.1, ignoring the rest.

One great addition are XRF (cross-reference) records, where IDs used by different societies and publishers can be stored. This includes (duplicate or wrong) ISWCs and ISRCs, work IDs, recording IDs, etc.

The long-awaited panacea. It is actually not that bad, except that it failed. Completely and utterly failed. And, honestly, no-one saw that coming. Or, at least, I did not. I actually implemented it in DMP early on, wrote very positive articles about it (and some rants), and had high hopes for it. And then the French pulled the plug.

Well, the new great hope is almost here. I really expect it released by the end of 2021. The main reason 3.0 failed was that ownership shares were thrown out. To restore history, 3.1 has manuscript shares added.

There are rumors it will have a JSON counterpart.

DMP is free, open-source software for music publishing, implementing all four versions of CWR. Deployment takes under 5 minutes and requires no technical skills.

You can enter metadata for several musical works (real or imaginary), create different versions of CWR, and compare them. This software, like all our software, has CWR syntax highlighting implemented, which will help you in the process. The CWR examples in screenshots were made in DMP.

CWR Tools are a set of online tools for creation and inspection of CWR files. They support all CWR versions. The only benefit, compared with DMP, is that you don't have to install CWT Tools. The downside is that nothing is saved on the server. Otherwise, it is using the exactly same code. The above examples could have been made in CWR Tools as well.

The next article describes CWR format.